The IoT-LAB testbed supports various embedded operating systems available for the Internet Of Things, such as RIOT.

In order to show networking capabilities of RIOT on the testbed, the IoT-LAB team has prepared 3 new tutorials:

Other RIOT tutorials are also available on the Learn page. 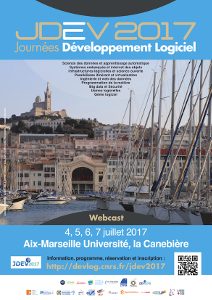 The FIT IoT-LAB team will be at the JDEV conference this year, taking place in Marseille, July 4-7.

JDEV is the DevLOG communiy annual event, gathering 500 people, mostly french academics, but also some people from companies, all involved in software development.

We will give a talk and a tutoriel in the Embedded, WSN and IoT track (see T1 program)

Hope to see some of you there!

After the release of a new version of the CLI Tools a few weeks ago, we are happy to announce the new SSH CLI Tools are now available on the testbed.

The IoT-LAB team has specially designed these tools to remotely control the A8 nodes from the SSH frontends or from a local machine. With the SSH CLI Tools, you’ll find interesting features such as:

You can read the documentation here.

The SSH CLI Tools source code is available on GitHub so if you find bugs or potential improvements, feel free to propose a Pull Request or open an issue.

Finally, since the SSH CLI Tools are available on PYPI, you can use them from your computer. In this case, they can be installed using pip:

Here is the details of the new features available from today.

We finally release a feature we would like to provide from a long time ago. For sure, it is really convenient to be able to specify a firmware that will be flashed automatically at the experiment starting, as much as to specify a profile for the automatic monitoring setup. But we are quite sure that you may have already say to yourself: “I just miss something to launch my own script automatically after that”.

We finally had some time to integrate this feature in our Open REST API, letting the possibility to specify a script that will be run in background on the SSH frontends. You can launch this script manually at any time during your experiment or you can specify this script at experiment submission. In this last case, it will be launched automatically at experiment starting.

We made this new feature easy to use by providing it to the CLI tools. Follow this documentation to get an introduction of this feature and learn how it works.

Version 2.4.0 of our IoT-LAB CLI tools is here, with new interesting features:

This new version is now available on PyPI, easy to install with this command:

You will also find on the module page the complete changelog.

We have updated our Contiki repository with the official one, providing support for Contiki 3.x.

From now, you will be able to test your Contiki solutions on the IoT-LAB testbed, using the last features provided by the Contiki OS, like, for example, the last er-coap implementation or the RPL/TSCH network.

This release comes with dedicated IoT-LAB examples, available in the examples/iotlab directory, including new examples on er-coap and RPL/TSCH. We have updated our Contiki tutorials.

Our master branch will now regularly be updated with the official repository master branch. Just run a git pull if you want to synchronize your local repository with the IoT-LAB one. Afterward, you will be able to easily retrieve the last Contiki updates with this set of commands:

For those who prefer to continue working with Contiki 2.7, we created an iotlab-2-7 branch containing the previous master branch. Note that the support brought in this branch for the WSN430 node has not been tested in the current master branch. But we are open to feedback and contributions to bring support for this in Contiki 3.x as well. Don’t hesitate to open a pull request on GitHub

See this history for details on the work done for TSCH support.