This page is archived. Its contain may be outdated.

The new generation is more generic and can host several open node like the M3 or A8 open nodes. Some IoT-LAB nodes will be assigned on the platform to host other type of open nodes using the USB dedicated port; it will also involve to customize the firmware.

An IoT-LAB host node embeds the gateway node and the control node dedicated to monitor the open node. The main processor board is a Variscite VAR-SOM-AM35 CPU like the A8 open node. Regarding connectivity, the board offers three USB ports, three Ethernet ports and the dedicated open node connector.

The board can be powered either : over ethernet (PoE) or by an external power supply (jack connector). The host node monitors the open node power supply mode : main supply or by a external battery (connector).

The dedicated open node connector offers a USB port to control the open node, a UART port, a I2C bus, an ethernet port and several GPIOs.

The main processor controls the “co-processor” which is a STM32 and a wireless chip AT86RF231 like the M3 open node.

This host node can also measure current and voltage (+3.3v, +5.0v, external battery) supplying the open-node. It is performed thanks to the co-processor connected to an INA226.

The detailed architecture of the host-node is illustrated below : 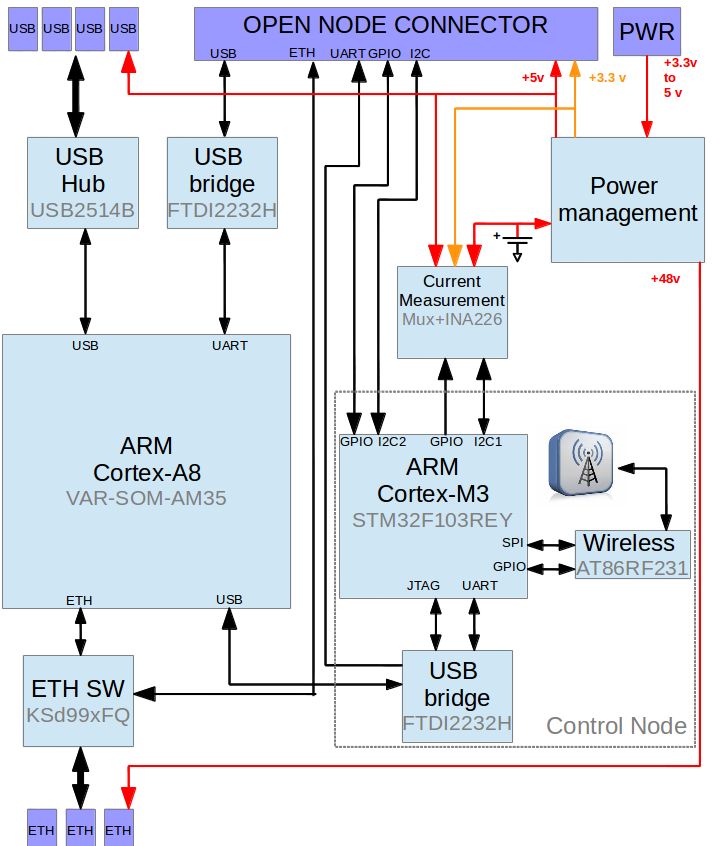 The complete schematics is avaible